Thanks as always to Pirate’s Cove, Whores and Ale, The Other McCain, Bacon Time and The Daley Gator for the Rule Five links!

Back down in our former stomping grounds of Colorado, Lauren Boebert appears to have won re-election, albeit narrowly.  Robert Stacy McCain has some thoughts.  Excerpt:

For some reason — I don’t know, I barely pay attention to this kind of stuff — Colorado Rep. Lauren Boebert is the one Republican that Democrats most hoped to beat this year. And . . . nope:

Although there will be an automatic recount done by the Colorado secretary of state’s office, Frisch said in a live Facebook speech that he did not ask for a recount, does not expect the results to change and does not want there to be fundraising done for an essentially fruitless cause.

“The likelihood of this recount changing more than a handful of votes is very small. Very, very small. It’d be disingenuous and unethical for us or any other group to continue to raise false hope and encourage fundraising for a recount,” Frisch said. “Colorado elections are safe, accurate, and secure. Please save your money for your groceries, your rent, your children, and for other important causes and organizations. I just got off the phone with Rep. Boebert. I called her to formally concede this election.”

Boebert acknowledged Friday that she had received Frisch’s concession call, tweeting, “I look forward to getting past election season and focusing on conservative governance in the House majority. Time to get to work!”

Frisch’s getting caught banging his side-piece in a storage unit probably didn’t help him any in this mostly rural district, either, although even with that this election was more of a squeaker than it should have been.  Granted CD03 includes the liberal bastions of Aspen and Vail, as well as the old blue-collar steel town Pueblo.   But I expect Mrs. Boebert was a little worried as the tallies came in. 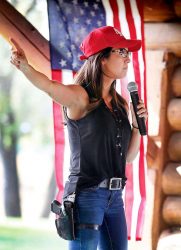 In the end, though, she seems to have won, and I think that’s good.  I like her being in Congress, and I’m gonna tell you why:

Because she pisses off all the right people.

She’s a spitfire, a staunch advocate for the Second Amendment, and an authentic small-town business owner, and all those are good things.  But my reason above is the main reason I’m glad to see her re-elected.  She not only pisses off the right people, she knows she is pissing them off and doesn’t give even one single fuck – in fact, I’m pretty sure she does it deliberately.

There’s a role for gadflies in government.  Lauren Boebert is a damn good one.