Thanks as always to Pirate’s Cove, Bacon Time, The Other McCain and Whores and Ale for the Rule Five links!  And thanks to our blogger pals at The Daley Gator for the link!

And, wow.  Two big Supreme Court decisions dropped last week.  Reactions from the political Left were, well, pretty unhinged.  I have some thoughts (like everybody else) but first, have a look at the actual decisions.

Here’s the “held,” the main finding: 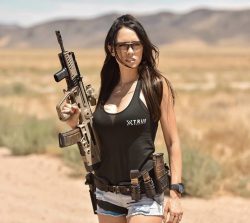 The constitutional right to bear arms in public for self-defense is not “a second-class right, subject to an entirely different body of rules than the other Bill of Rights guarantees.” McDonald, 561 U. S., at 780 (plurality opinion). The exercise of other constitutional rights does not require individuals to demonstrate to government officers some special need. The Second Amendment right to carry arms in public for self-defense is no different. New York’s proper-cause requirement violates the Fourteenth Amendment by preventing law-abiding citizens with ordinary self-defense needs from exercising their right to keep and bear arms in public.

You heard… well, no, you didn’t hear it here first.  But there it is, in writing, from a Justice of the Supreme Court:  The right to keep and bear arms is not a second-class right.  That’s what a lot of us have been saying all along, but it’s nice to have it here.  Thanks, Justice Thomas!

Here’s the “held,” the main finding:

The Constitution does not confer a right to abortion; Roe and Casey are overruled; and the authority to regulate abortion is returned to the people and their elected representatives.

“My body, my choice,” is a popular refrain among the Left, rather more so these last few days; I’d ask them how they square that with their support of mask/vaccine mandates during the Kung Flu scare, but you can’t expect intellectual consistency from these people.

While I don’t have a personal dog in this fight, it’s important to read the decision here.  Dobbs, it seems to this non-lawyer, was decided primarily on procedural grounds; the upshot of it is that Roe was wrongly decided, and that Casey, which reaffirmed Roe, based that reaffirmation on stare decisis (The doctrine or principle that precedent should determine legal decision making in a case involving similar facts) and did not take into account the underlying viability of Roe.

One of my fellow Glibertarians, Compelled Speechless, had this to say:

Despite knowing for 50 years that Roe vs. Wade was a dubious precedent that may eventually be overturned, congressional democrats did literally nothing to try and push legislation through that they knew full well would put abortion “rights” on much firmer footing despite the fact that they had multiple times where they had enough seats to plausibly make that happen. They paid lip service to their constituency and then acted like the security guard in Austin Powers waiting for the steam roller to slowly run them down. All because it was a bottomless well for their fundraising dollars. The GOP didn’t do this (literally, they had nothing to do with this), SCOTUS only corrected the problem by saying this is a matter for legislators. Democratic legislators did this by refusing to take action to enshrine what they believe to be a “fundamental” right into law for their own selfish reasons.

If you’re a progressive who truly believes your rights are violated, you should be looking at your own congress critters the same way the parents in Uvalde are looking at their police force right now. Not only did they do nothing for decades, they actively prevented anyone from doing anything about it so they could have a wedge issue always at the ready. Daily reminder: your government and your “representatives” don’t give a shit about you or what you want. Sorry for the rude awakening.

I couldn’t possibly put it any better.

And, by the way, damn the polls, no matter what they show.  Forget what the majority does or doesn’t think (I’m really trying to use the word ‘think’ unironically) on either of these decisions; this is a matter of interpretation of the law and of the Constitution, which is the supreme law of the land.  It’s not a popularity contest.

It’s been an interesting few days.  The Left is already howling, and claiming loudly that these issues will help prevent the red wave that’s coming this fall.  My prediction:  They won’t.  What’s going to drive that red wave is the recession that we’re almost certainly in, $6/gallon gasoline, ever-rising inflation rates, and most of all, the obvious and egregious incompetence and stupidity of the Biden(‘s handlers) Administration.