Thanks as always to The Other McCain, Pirate’s Cove, The Daley Gator, Whores and Ale and Bacon Time for the Rule Five links!

The science nut (and science fiction writer) in me finds this kind of thing extremely cool:  We can now see an image of the supermassive black hole at the center of our galaxy.  Excerpt:

The image is a long-anticipated look at the massive object that sits at the very center of our galaxy. Scientists had previously seen stars orbiting around something invisible, compact, and very massive at the center of the Milky Way. This strongly suggested that this object — known as Sagittarius A* (Sgr A*, pronounced “sadge-ay-star”) — is a black hole, and today’s image provides the first direct visual evidence of it.

Although we cannot see the black hole itself, because it is completely dark, glowing gas around it reveals a telltale signature: a dark central region (called a “shadow”) surrounded by a bright ring-like structure. The new view captures light bent by the powerful gravity of the black hole, which is four million times more massive than our Sun.

“We were stunned by how well the size of the ring agreed with predictions from Einstein’s Theory of General Relativity,” said EHT Project Scientist Geoffrey Bower from the Institute of Astronomy and Astrophysics, Academia Sinica, Taipei. “These unprecedented observations have greatly improved our understanding of what happens at the very center of our galaxy and offer new insights on how these giant black holes interact with their surroundings.” 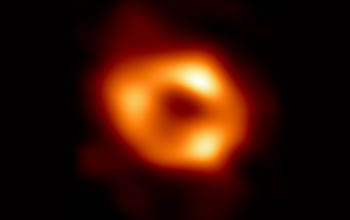 I find this fascinating.  Granted this is a composite made from tiny snaps from many telescopes, but it looks about like you’d expect the accretion ring around a black hole to look, so it’s certainly plausible – and it’s not like you’d want to get too close to the thing to photograph it with traditional means, as the center of the galaxy is probably a (literal) hotbed of radiation and super-heated gas.

We’ll probably never have substantial human colonies anywhere, even Mars, in my lifetime.  But that doesn’t mean we can’t look outward, even if we can’t go outward – yet.  But if the last few hundred years has taught us anything, it’s that we can do amazing things when we set our minds to them.  And maybe, if our current crop of ineffective, incompetent and idiotic politicians stay out of the way, maybe we will be able to one day move outwards.