Thanks as always to The Other McCain, Pirate’s Cove, Whores and Ale, The Daley Gator and Bacon Time for the Rule Five links!

Over at PJ Media, Rabbi Michael Barclay had some interesting things to say about current affairs.  Excerpt:

A criminal is wrongfully killed, and “peaceful demonstrations,” which are actually violent riots, break out nationwide. The flag of a radical and violent group is placed next to the national flag on government buildings. Out of fear of being canceled and losing business, individuals and corporations succumb to publicly supporting this violent organization. Mandated behavior is compelled upon threat of arrest by the political elite and leadership. Despite objections from parents, schools begin teaching an alternative “history” and embrace prejudice, anti-Semitism, and sexual permissiveness as part of the school curriculum.

A President overreaches and takes on “emergency powers,” which create an authoritarian regime that demands supportive behavior and calls any criticism “disinformation.” A new agency of the government is created to “fight this disinformation”… an agency that even has access to armed personnel. This new agency is led by a fanatic who is arguably delusional in their own self-perception and fully committed to stopping the dissemination of any information that is not part of the authoritarian narrative. And through it all the media is a willing accomplice, even striking against other media outlets that try to present opposing views.

Sound like a brief recap of the recent past in this country?

The challenge is that this is actually a description of the development of the Nazi regime in Germany almost a century ago.

If this scares you, it should.

It’s been said that history may not always repeat, but it often rhymes.

Of course, there’s a reason that Godwin’s Law is a thing.  And the Left is far, far more prone to falling afoul of this than the Right; after any significant event in the political world, you can almost set your watch by the hysterical screech of “Nazi!” that follows.  But there’s a difference between the late Weimar Republic and our current situation today, and that can be summed up in one word: 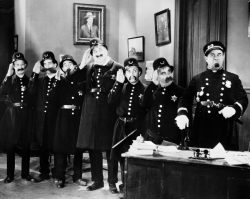 Say what you will about the Germans in the Nazi Party in the 1930s, but they weren’t stupid.  They knew what they wanted and they were willing to climb over piles of bodies to get there.  Whereas the current political Left in our country right now is about at the Keystone Kops level of ability.  Hell, for that matter, when you’re talking Congress, most of the Right is little better.

Our current political class is much more likely to stumble us into ruin that deliberately direct us there.  But when you consider the likely destination, how much difference does that make?