Thanks as always to The Other McCain, Whores and Ale, and Pirate’s Cove for the Rule Five links, and to our blogger pals over at The Daley Gator for the link!  As always, if I’ve missed your link somehow, let me know in the comments and I’ll add you to the weekly FMJRA (hat-tip to Robert Stacy McCain for this term.)

Now then:  I found this interesting piece by Emmett Tyrrell on the infantilization of the West, and it’s worth the read.  Excerpt:

Are you familiar with the work of professor Simon Gottschalk? I have only become familiar with his work recently, but I commend it to you. He is a professor of sociology with the University of Nevada at Las Vegas. He apparently watches a lot of television in the course of his work, and he even takes notes. He has come up with a brilliant, if alarming, insight. According to the professor, television assists in spreading the “infantilization of the West.” For instance, if you have seen a grown man wearing shorts as winter approaches, pay attention. Probably, he is carrying a bottle of water and has his baseball cap on backwards. Perhaps, he is wearing a T-shirt with an infantile declaration across the chest. If this spectacle alarms you, you probably are in Gottschalk’s camp. You certainly are in my camp.

I live in Washington D.C., and I see spectacles such as the above all the time. Since the Biden Administration settled in, I have even seen an influx of this sort of dress around the White House. In fact, I would not be surprised to see a fellow dressed like this on the very steps of the Old Executive Office Building. He probably checks his water bottle at the front door and submits his attache case for the Secret Service’s inspection. Protocols have declined in the dress code, but I assume everyone still observes security regulations. By the way, I would not be surprised to see women in the Biden White House attired in this way, too, particularly wearing their baseball caps backwards as they skip into the Oval Office. Doubtless, Gottschalk would be alarmed even if he is a Bidenite.

I hadn’t really thought about the infantilization angle but I do remember back to school nights when the kids were younger, some years ago now (our youngest is 24.) It never failed that some guy in is forties would show up in baggy shorts, white sneakers five sizes too big, an a massively oversized t-shirt.  These were the same assholes who wore sunglasses indoors and inevitably asked about five stupid questions that the person speaking had already answered, if only the idiot had been paying attention instead of looking at his phone.

Granted I dressed casually when I couldn’t avoid those things; jeans and a decent button-down shirt.  I’m a big fan of business casual when circumstances require me to go into a work site.  Around the place, I wear Duluth Trading jeans or Key hickory bib overalls for choring. 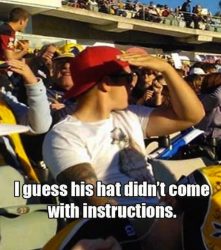 Oh, yeah, and the backwards cap.  The bill is there for a reason, stupid.

Tyrrell goes much further than clothing, particularly in advertising, citing as an example the use of cartoons to sell products to adults.

Maybe there is something to the idea of this being a symptom (probably not a cause) of infantilization.  But the cause, I think, is obvious:  We have raised several generations of the most coddled, pampered, soft-shelled, weak individuals that have ever existed in the history of mankind.  And we’re seeing the fruits of that now, as we’re well into the “weak people make hard times” phase of the historical cycle.