Thanks as always to The Other McCain, Pirate’s Cove, Bacon Time and Whores and Ale for the Rule Five links!  And thanks once again to our blogger pals over at The Daley Gator for the linkage!

Now then:  To quote Groper Joe Biden, this is a big fucking deal.  Relevant excerpt:

The panel affirmed the district court’s summary judgment in favor of plaintiffs challenging California Government Code § 31310, which bans possession of large-capacity magazines (“LCMs”) that hold more than ten rounds of ammunition; and held that the ban violated the Second Amendment.

The Ninth Circuit employs a two-prong inquiry to determine whether firearm regulations violate the Second Amendment: (1) whether the law burdens conduct protected by the Second Amendment; and (2) if so, what level of scrutiny to apply to the regulation. United states v. Chovan, 735 F.3d 1127, 1136 (9th Cir. 2013) 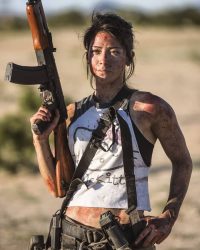 Upshot:  The Second Amendment protects magazines of whatever capacity.  And that’s from the Ninth Circuit, the most liberal Circuit Court in the land.  If this stands, this has huge implications; it could, effectively, overturn every magazine ban in the country.  Including the ridiculous fifteen-round limit here in Colorado.

Of course, wacky Californey can always appeal for an en banc decision by the still-liberal Ninth, and for whatever insane reason, the Supreme Court has been reluctant to take Second Amendment cases lately; one wonders whether that is because the balance of the Court is so close now as to make an actual Constitutional determination difficult, or whether they fear the political implications of a decision that will piss plenty of people off no matter how they rule.

But at the moment, this is a clear victory for the Second Amendment.  It’s not wrong to sit back, smile and enjoy the moment, before the next inevitable battle.