Thanks as always to Bacon Time and Pirate’s Cove for the Rule Five links!

A superficial cliché goes something like this: “I’m an independent thinker; I vote for the person, not the party.” This pronouncement is supposed to convey open-mindedness and political sophistication on the part of the pronouncer. Wrong. This is idealism and naiveté about the way our electoral process, government and politics work. It shouldn’t be mistaken for wisdom. In practice, we have a two-party system. Either a Republican or a Democrat is going to be elected president. Minor-party candidates don’t have a chance, at best they can be spoilers – like Nader costing Gore the presidency to Bush in 2000. Ross Perot got 19 million popular votes in 1992, and exactly zero Electoral College votes.

In Europe’s multiparty parliamentary democracies, governing coalitions are formed after an election to include minor parties necessary to form a parliamentary majority. In our constitutional republic, the coalitions are already in place. The Republican coalition is mostly a geographic alliance of middle-America, conservatives, individualists who prefer limited government, those who believe in a-free market economy, American exceptionalism, a strong national defense, social-issues conservatives and supporters of traditional American values. The Democrat coalition is dominated by west coast and northeastern states, it includes guilt-ridden liberals, progressives, collectivists, labor unions (especially the teachers unions), government workers, academics, trial lawyers, net tax-receivers, identity-politics minorities, feminists, LGBTQ’s, enviros, nannyists and activists for assorted anti-gun, anti-capitalist, anti-business, anti-military and world-government causes. I say party trumps person because regardless of the individual occupying the White House, the party’s coalition will be served. 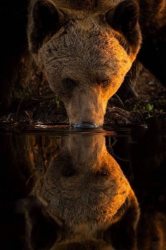 Mr. Rosen makes a good point, even though it’s frequently a challenge for one, like me, whose political philosophy doesn’t exactly fit either major party.

As a staunch minarchist libertarian, I look at both parties, and see two groups of people who want to interfere with my life and liberty – just in different areas.  But there’s one big difference, and that’s the Second Amendment.  That’s why, living as I do in a swing state, I vote for Republicans.

Why?  Because the right to bear arms is the right that secures all the others.  Without that, we’re helpless in the face of whatever elected or unelected horse’s ass decides they want to run roughshod over us.  With it, we always have that last resort out of the traditional three:  Ballot box, soap box, cartridge box.

The GOP is far from perfect.  They have a distinct tendency to favor continuing the idiotic War on Drugs, and too many of them also run on legislating morality, which should be a personal and not a political issue.

But for a libertarian, they sure as hell are the lesser of two evils.  It’s sad that we’ve come to this, but here we are.   And that’s why I agree with Mike Rosen on this issue:  Party does indeed trump (pun not intended) person.