A judge has overturned a lawsuit brought by two University of Texas at Austin (of course) professors against Texas’ CCW on campus law.  Good news!  Excerpt:

Professors Jennifer Lynn Glass (sociology), Lisa Moore (English), and Mia Carter (English) banded together and filed a lawsuit that sought to overturn the new law. One professor argued that the “possibility of the presence of concealed weapons in a classroom impedes my and other professors’ ability to create a daring, intellectually active, mutually supportive, and engaged community of thinkers.”  (Animal Note:  What an enormous pile of fresh steaming horseshit.) Their reasoning centered around the idea that students will be unable to speak freely––a First Amendment argument––in an environment where other students are armed.

But this logic posits that students will pull guns on each other when they hear ideas they disagree with––an unlikely outcome. Even for controversial topics like abortion and, ironically, gun rights, it would be beyond the scope of reason to expect that a classroom conversation would become so heated that a student’s life would be threatened.

Judge Yeakel drew on the reasoning in the 1972 free speech case Laird v. Tatum, which said that “Allegations of a subjective ‘chill’ are not an adequate substitute for a claim of specific present objective harm or a threat of specific future harm.” 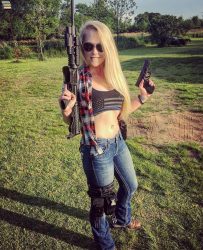 Is it really necessary to point out that the serious threats to free speech on college campii are not coming from legal, permitted CCW carriers but from the masked and hooded fascists of the ironically-dubbed “Antifa” movement?  Not from the NRA-supporting Right, but from the totalitarian Left?

They Antifa fascists are the ones starting fires and throwing bricks.  They are the ones attacking anyone to the right of Leon Trotsky who has the temerity to try to speak on a college campus.

It’s good that this suit was rightly overturned.  It’s sad that the dipshits who brought this suit can’t see the overwhelming irony of their action.