We’ve had a few new visitors around the bird feeders lately. 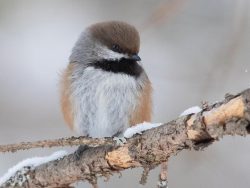 First up, a while back some new chickadees started showing up along with our usual chickadees, the black-capped variety.  The newcomers, slightly smaller and with brown caps instead of black, are Boreal Chickadees, a type found only in the north.  I’d never seen one before moving here, so their late-winter presence has been fun. 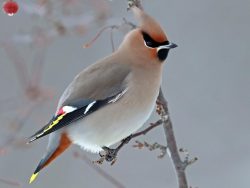 The second was a Bohemian Waxwing, another bird of the north, and another I’d never seen before.  Back in the Iowa of my youth as well as the Colorado I lived in for so many years, we had Cedar Waxwings as frequent visitors, but this is my first look at the Bohemian Waxwing.  I hope they stick around; waxwings are so beautiful that they don’t look quite real.

As I’ve said so often, I like having our birds around.  They punctuate our days with song and color, and life is better for their presence.  Now then…

While we’re at it, don’t mess with Florida!

This is cool – a fossil of a dinosaur actually killed in the asteroid strike.

Heels-Up Harris’s vice presidency is like a train wreck ran into a shitshow and pushed it into a dumpster fire.

2 acquitted, jury hung on 2 more in Whitmer kidnap plot.  The FBI stepped on a rake on this one.

How can you tell Barack Obama is lying?  His lips are moving.

The Dunning-Kruger Effect is real.  For evidence, just look at Congress.

1981 called, they want their inflation back.

Mortgage rates are going up, too.

Salon’s Thom Hartmann is an idiot.

Vox’s Emily Stewart is an idiot.

Brian Stelter continues to prepare for his second career as an actual potato.

Salon’s Kathryn Joyce is an idiot.

Slate’s Oliver Milman is an idiot.

The Nation’s Kyle Paoletta is an idiot.

OK, that’s enough for this week.  I actually do read these, you know.

Glen Campbell was a man of rare talent, which I have showcased before in these virtual pages.  While he’s best known as a country balladeer, with songs like Wichita Lineman and Southern Nights under his belt, what I find fewer people know about him is his excellent technical guitar work and occasional forays into other genres – like classical music.

Here, from a performance of unknown year but obviously later in his career, is Glen Campbell backed up with a full symphony orchestra, and his take on The William Tell Overture – complete with a bit of commentary on Glen’s youth and the Lone Ranger.  Enjoy.