We were very pleased the other day when we saw that one of these little fellows moved into the big lilac bush in front of our house.  This is not an actual photo of ours, just a representative sample of this little creature, a Least Weasel.  These little guys never stop moving around and we haven’t gotten a good photo yet. 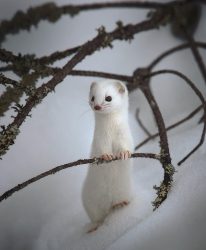 What makes these little nonstop predators interesting is that they are not only the smallest of the Mustelidae, but that they are the smallest of the order Carnivora altogether.  They look like an elongated mouse with sharp little predatory teeth.  Their metabolisms require them to eat, a lot, so their constant movement is pretty much a nonstop search for mice, hibernating bugs and sleeping birds. They’re obviously good at it, because this is a widespread, successful, circumboreal species – they are found not only in North America but also Asia and Europe.

We’ve enjoyed watching ours when we can see him (yes, I’m presuming his gender), and it’s just great living in a place where we have these kinds of critters for neighbors.  We’ve named him Herman the Ermine.

RIP, Sidney Poitier.  One of the greats.

Sieg Heil to you too, asshole.

Chuck Schumer can fuck right off.  More on that:  No, you weren’t, you mendacious, dissembling horse’s ass.

America is not a democracy.  No shit – I’ve been saying this for years.  But this writer wants America to move towards greater democracy, and away from what we are – a constitutional republic.  That would be disastrous.

Purveyors of nitwittery on Amazon.  Who knew?

Honestly, Ford screwed the pooch on the new Bronco.  If they would have brought out a manual-transmission, normally aspirated V8, manual hubs, manual transfer case, crank windows and manual door-lock recreation of the original Bronco, I’d have been interested.  This doodad-laden thing?  Nah.

Why can’t America win a war?  Because our military is now an equal-opportunity woke jobs program, not an organization intended to close with and destroy the enemy by overwhelming fire, maneuver and shock effect.

Adam Schiff-for-Brains is an idiot.

The LA Times’ Robin Abcarian is an idiot.

The New Yorker’s David Remnick is an idiot.

USAToday’s Derrick Johnson is an idiot.

Paul Krugman (Repeat Offender Alert) continues to be a partisan hack, and an idiot.

An idiot loses her idiot platform at an idiot network.  At MSNBC, it’s idiots all the way down.

The Guardian’s David Daley is an idiot.

Faith Hill is kind of a big deal in country music, and one of her best-known tunes is her 1999 song Breathe, from the album of the same name.  While the album cut of that song is good, there’s a version I like better; her 2003 television special When the Lights Go Down included a version of Breathe where she is accompanied by one of the immortals of rock & roll, none other than the great Carlos Santana.

The video includes not only the performance but a few shots of Faith (who appears to be as nervous as a schoolgirl) meeting Carlos, and Carlos describing how her song had touched him, which is why he wanted to play it with her – and note, mind you, how he lets Faith take the lead, and just accompanies her with his typically brilliant guitar work.  A true professional and a great song.  Enjoy.