I’ve been toying around some with “alternative” social media, mostly Parler and Gab, and I’m ready to give up on both.  Here’s why:

First, Gab.  The layout is generally OK and I like the “Groups” feature, but the “batshit-crazy” ratio is a little too high to suit me.  Anyone who claims that aren’t nutbars on the Right just as there are on the Left clearly isn’t paying attention, although the Right doesn’t seem as willing to elect them to office.  (But only just.)

Second, Parler.  Parler was a little more sane, with again, a decent layout but no “groups” or sub-fora that I was able to find.  But then Parler re-did their login procedure from an annoying “click every panel that contains a bicycle” CAPTCHA to the even-more-annoying “enter the code we sent to your cell phone.”  I never provided them a phone number and refuse to do so, so now I’m not able to log in to Parler at all.  Repeated requests to their customer service folks have gone unanswered.

So, by way of conclusion:  Sure, we have alternatives to Derpbook and Twatter now.  Big deal.  I decided early on to ignore those platforms because the terrible noise-to-signal ratio, and from what I’ve seen, those two new alternatives are no better.

I hate discussion by bumper sticker, and I’ll be damned if I’ll engage in it.  So, True Believers, I guess if you give a damn about my thoughts on anything, you’ll just have to come here Monday through Saturday and read them.

Well, for that and the occasional Rule Five imagery, too.

Ferry from Twatt in the Orkneys to Scotland, and then you can drive south down through Cock Bridge, Dick Place, Cockermouth, move through Penistone and Cock Alley, slide east into Slutshole Lane, down through Fingringhoe, and end up on the south coast at Ass Hill and Shitterton. 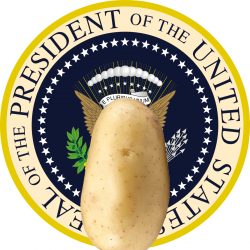 That guy in the Imperial Mansion continues to improve his impression of an actual potato.

Also:  President Biden(‘s handlers) are off to a bad start.  If you ask me, I’m guessing it’s gonna get worse.  Maybe even worse than the Carter years.

Answers you didn’t want to questions you never asked.

Everybody’s different, but I sleep a lot better with my own dear Mrs. Animal beside me.

Some folks want to bring jaguars back to the United States.  I doubt they’ll make it as far north as the Susitna Valley, so, meh.

I’m not a fan of “doxxing” anyone, but it is possible to push someone too far.

This kind of shit is why we left Colorado.

You know, maybe some people are ‘rona ‘vaccine-hesitant’ because assholes in government keep telling them they’ll still have to wear face-diapers and socially distance afterwards.

Good guy with gun stops bad guy with gun.  Sad that one innocent person died, but many more could have if not for a good guy with a rifle, and if you look around, the legacy media is ignoring this.  The Narrative must persist.

Dammit, Piers Morgan, stop making me agree with you!

NBC’s David Mark is an idiot.

Slate‘s Dahlia Lithwick is an idiot.  Amazing how often her name pops up in this section.

Maxine Waters (Crazy Old Bat – CA) is an idiot as well as a serial abuser of government employees.

“Pothole Pete” Buttigieg is an idiot.

Apparently everyone at CNN are idiots.

The Squad’s Rep. Cori Bush is an idiot.

USAToday‘s Ross Wiener is an idiot.

There never will be another Frank Sinatra.  Nobody since has even come close.  While his fellow Rat Pack members were all possessed of tremendous talent, even in that company Mr. Sinatra stood out.  Here, from 1966, is the Chairman, performing Luck, Be A Lady.  Enjoy.