On Saturday afternoon last, I was out on my deck with an ice-cold beer and a fine cigar, enjoying a fine, sunny Sustina Valley afternoon.  After a bit, I heard a motorcycle stop on the road out in front of the property. Then I heard someone’s voice calling to something, and heard him crashing into the brush. So I went down to see what was going on.  The motorcycle rider had seen 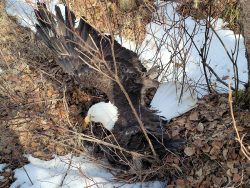 this guy, whose left wing was broken.  Near as we could figure, he had made to drop on some prey critter and had clipped the power line.

One of the neighbors came along, said they had a big dip net and a wire kennel. So they went and got it, then motorcycle guy and I managed to get the bird calmed down, into the net and then into the kennel. Meanwhile, the neighbors made some phone calls, and found they could take him down to Houston to the rehab center. 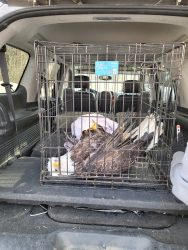 So off he went. Motorcycle guy and I both petted him on the head and told him everything was going to be OK.

And I really, really feel like I personally helped America.

He probably won’t fly again, they almost never do once a wing’s broken, but if not, he’ll have a comfortable career as an ambassador bird for the Matanuska-Sustina Borough schools, teaching kids about raptors.

Just another weekend in Alaska.

Lumber prices are skyrocketing.  Because supply chains are a thing, and the Imperial and local governments have wrecked them with the Moo Goo Gai Panic.

Why do the big nuts rise to the top of the bowl?  Metaphor for government? 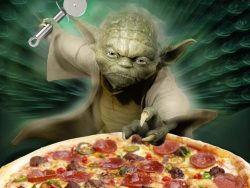 Begun, the pizza wars have.

Cancer may have been more common way back when than we thought.

Well, here’s one of President Biden(‘s handlers).  Plenty of folks are wondering who is pulling the old fool’s strings, and here’s one of them.

No, Biden Doesn’t Have a Mandate to Remake America.  No shit.  They lost seats in the House, barely maintaining control, and managed a 50-50 tie in the Senate – only technically a majority because Heels-Up Harris holds the tie-breaking vote.  Dems got roundly trounced at the state level.  That, True Believers, does not a mandate make.

Speaking of, it looks the the $4T spending plan proposed by President Biden(‘s handlers) will be going into the trash, where it belongs.  We hope.

Racist!  President Biden(‘s handlers) impose racist travel ban on India.  I mean, travel bans were racist when Trump did them, right?  Sauce for the goose, baby.

Texas mulls over Constitutional Carry.   Predictable pants-shitting from legacy media ensues, even through several states already have this (including our own Alaska) and somehow the predictions of bodies lining the streets haven’t come to pass.

Hypocrisy, thy name is John Kerry.  What an asshole.

So, where is everybody?

It’s probably a little too late for that.

Man, it’s a bumper crop of idiocy this week.

Vox‘s German Lopez is an idiot.

These people are idiots.

John Podesta is an idiot.

Salon‘s Jon Skolnik is an idiot.

CNN’s Clay Cane is an idiot.

The New York Times‘ Charles Blow always was and remains an idiot.

Salon’s Chauncey DeVega is an idiot.

Time‘s D. Markovits is an idiot.

Robert Reich is still an idiot.

Music is a great vehicle for conveying emotion.  Nobody can dispute this.  And the love song is, of course, a great example of that principle.

But love songs are not all created equal.  In my not-so-humble opinion, the best love song ever written can only be Charlie Rich’s Behind Closed Doors.  Here, have a listen: