Is there such a thing as a justified shooting of a child?  Well, maybe, if you define “child” as “anyone under eighteen.”  I don’t think the subjects of this article qualify, but have a read anyway.  Excerpt:

These are the words that best describe the social media-organized lynch mob of hundreds of black youths attacking white college students and police in Philadelphia near Temple University Friday night.

So far, these violent young criminals have largely gotten away with their brutal criminal assaults because they’ve been fortunate in their victim selection process.

Eventually, they are going to attack an armed concealed carrier, or they are going to carry out one of these lynchings—defined as a punishing a person without legal process or authority, often as an act of bigotry—in front a of the residence or vehicle of someone who has firearms and the will to use them in third-party self defense.

This scenario may well likely happen, and it sure as hell will lead to a 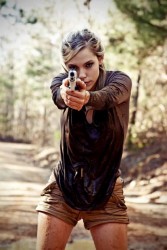 vicious backlash; the shooter, acting in self-defense (direct or third-party) will be painted as an extremist and very likely a murderer, and that person will never be safe appearing in public again.  Mobs will march shouting “no justice, no peace,” ignoring the fact that justice was what was meted out; the shooter will probably be forced into hiding.

But what I object to is the characterization of these thugs as “children.”  They aren’t acting as children, they are acting as adults – violent, out of control, murderous adults.

They have no one but themselves to blame if someone treats them as such.