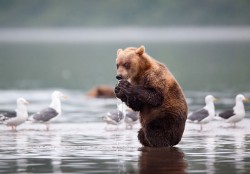 Yes, really.  Maybe only on a rat, but the implications… well.  Um.  Excerpt:

Lab rats probably don’t have many deep thoughts. But one of these days, right as a scientist is transplanting a testicle onto a rats’s neck, one of those little furry guys is going to ask itself—what did I do to deserve this? And how will I get my revenge?

Case-in-point, the little guy below. Entire testes have proven especially difficult to transplant back into the same place, at least in lab animals. So, a team of scientists decided to transplant them somewhere else in the case of these rats—onto their necks. And the scientists plan to continue transplanting testes onto rat necks, so that one day, entire testes may be reliably transplanted from person to person.

Testicles are incredibly special organs, since they’ve got something called immune privilege. That means they’re safe from the body’s immune response, and can survive in another body for a while without being rejected. The testicles’ privileged status serves to protect the sperm cells inside from an attack by the body. In theory, this means doctors should be able to easily transplant them between people—which could be useful in cases where a person undergoes a treatment that would kill all of their sperm. That’s why the researchers are doing the research, so they can study this immune privilege.

OK, now I will admit to stealing this joke from the article comments, but it’s kind of an obvious one.  Any Men in Black fans out there?  Here’s a surgical technique that could make a real-life Ballchinian.

Jokes aside, this could be pretty significant for a 9-year-old boy who is about to undergo radiation therapy.  It could give that boy the chance to have a family later in life; something that he may otherwise never have known.

It’s an amazing modern era we live in.

Of course, the jokes around this are going to be absolutely nuts.