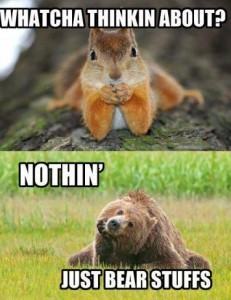 Today I’m channeling my inner Thomas Sowell, one of my personal heroes, and posting some random notes on the passing scene.

On minding your own business:  Yesterday morning I had to run down to the local computer parts shop looking for a hard drive cable for a dying laptop.  I enjoyed a cigar on the drive down, and as the smoke was not finished, I stood for a few moments outside the store entrance to finish the cigar.  Next to an ashtray, mind you, in an area marked as a smoking area.

A Millenial-looking dude with dreadlocks walked past and evidently smelled cigar smoke.  He looked at me and began, “you know, if you ask me…”

He shut up and walked away. 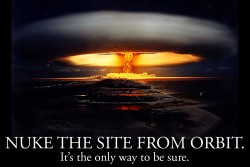 President Obama will be visiting Hiroshima to promote “his vision for a nuke-free world.”   There is very little the President could do to more clearly illustrate his head-in-the-clouds cluelessness.  There will never be a nuke-free world.  That genie simply cannot be put back in the bottle.  There will always be nukes and there will always be bad actors willing to use them – at present the only thing deterring many of these folks is that fact that we have them, too.

At a recent gun show, I spent some time examining a 4″ Smith & Wesson 57 in the highly underrated .41 Magnum.  An old friend has a 6″ version and has developed a series of “.41 Special” loads for that piece that are powerful and easy to shoot.  The main thing that stopped me from making the offer is the degree of overlap in portability with my S&W 25-5 in the equally useful .45 Colt.  Can anyone think of something the .41 Mag has that the .45 Colt lacks?

Speaking of firearms:  In this time of interest rates that are effectively zero, old guns may be a better investment than stocks and bonds.  I’m an avid gun buyer/shooter/trader myself, and I have to agree to the extent that I’ve never lost money on a gun deal.  I’ve only ever even broken even on one, and that was deliberate, as I was selling a rifle to a friend for what I had invested in it.

Yesterday afternoon I saw a car with “Bernie for President” bumper sticker, next to which was a sticker with a Bigfoot and the words “I Believe.”  That juxtaposition was unwittingly appropriate; you’d have to be credulous enough to believe in Bigfoot if you also believe in the loony old Bolshevik’s economic policies.