Before we begin, check out the first in a new series over at Glibertarians!

Among elections of more recent history, that of 1968 is likely the best-known. There was a Hollywood movie about it just last year, concerning the riots at the 1968 Democrat National Convention in Chicago. These protests showed how deeply divided the Democratic Party was over the Vietnam War; though the party nominated Vice President Hubert Humphrey, many Democrats opposed President Lyndon Johnson’s policies on Vietnam. But most readers will not know or remember that both parties saw tumultuous primary seasons that year, that Mitt Romney’s father ran in the Republican primary, or that controversial segregationist George Wallace ran as a third-party candidate, trying to outflank both GOP nominee Richard Nixon and Humphrey on issues such as civil rights and economics. Riel details how Wallace knew that he could not win but understood that if he could garner 10-15 percent of the popular vote nationally, he might deny either candidate a majority in the Electoral College. From there, the race would be decided by the House of Representatives, which could put Wallace in position to play kingmaker, since he would have congressional allies in the Southern state delegations. Wallace won only five states in the end, however, and failed to accomplish his goal.

Riel uses these stories to demonstrate how often political realignments happen through elections, such as the 1860 election that established the Republicans as a major party, or the 1932 election that helped enshrine the idea that the federal government had a duty to help people in need. Sometimes an election’s consequences don’t become apparent until years later. Barry Goldwater lost big in 1964, but 16 years later, Ronald Reagan won decisively on the platform that Goldwater had introduced.

Riel also stresses that the United States is going through a tumultuous political period. He recognizes that presidential elections will continue to be divisive and produce strong emotions on both sides, but the country has held elections through wars, riots, and economic collapse. Past elections can offer useful lessons as we grapple with today’s challenges.

While the article is interesting – and the book is now on my ‘to-read’ list – I’m not sure how predictive an analysis of previous elections, especially presidential elections, will prove to be in 2024.  Why?  Well, I’m a-gonna tell you. 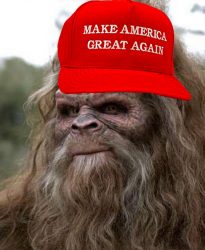 First, we’re dealing with something new here:  A sitting President that is clearly and unarguably impaired, who nevertheless insists he will seek re-election.  There are good odds he’ll be removed from office for one reason or another before 2024, but his replacement will be a cackling imbecile whose approval ratings are about as high as syphilis.

We’re also dealing with an abrasive billionaire who managed to rock the political class back on its heels in 2016 who is likely to try to Grover Cleveland himself into another term.  While his first term was good for the economy, he faced brutal non-stop attacks from the legacy media and agents of the Democratic party (but I repeat myself) and while he promised to “drain the swamp,” the swamp seems to have survived his first four years just fine.

The field may well welcome a wild card in 2024.  In any case, this year’s mid-terms may give something of a preview.