Before we dive in to today’s ottery story, check out the first installment of a new fiction series over at Glibertarians!

Now then:  You can’t beat this headline: Man Minding His Business Gets Mangled by a Gang of Angry Otters.  Excerpt:

Even so, as they say at zoos, anything with a mouth can bite.

Or, the herd way.

The 60-something got sacked by a roving gang of semiaquatic psychos.

[Graham]…was…approaching the visitors center when he spotted around 20 otters crossing a dimly-lit path in front of him. He claimed it was the first time he had seen the mustelids in the area despite taking his morning walks there for five months.

A jogger ran through the group, setting them off.

The otters went “crazy like dogs” and tried to rip into the runner.

When that individual escaped, the animals turned toward you-know-who.

No word on whether they had marshmallows, but the critters crunched into Graham like a cracker.

They attacked and attacked s’more.

The ornery otters reportedly hit him in the ankles, pushed him down and leaped on top of Spencer, then proceeded to bite the prone man around his legs, shoes and buttocks, with one nipping his finger, according to the media reports.

In ten seconds, he was bitten 26 times.

Salvation came after the victim’s friend, who was about “15 paces” away, ran up to him screaming and yelling in an attempt to scare the hairy hooligans away.

Graham hightailed it to the visitor’s center with the vicious weasel-like wackos in pursuit. 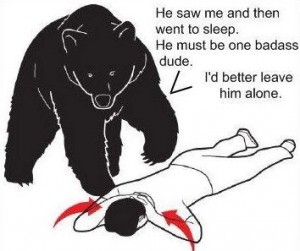 This is some funny stuff from a distance, and the article’s punning makes it more so.  But there’s a serious message behind the wacky verbiage:  Wild animals are, you know, wild.  Every year visitors to places like Yellowstone and, yes, here in the Great Land, learn this lesson to their sorrow.

Unfortunately we live in an era where most folks have their lessons on wildlife from Disney movies.  Most of the so-called “environmentalists” you see opining online and in the letters to the editors sections of the few remaining print papers are urban dwellers with no idea of what it’s really like to live out in the actual environment – other than maybe a one-week vacation spent in some expensive chalet with a view.

Jokes aside, Mr. Spencer here didn’t do anything wrong, and got bitten up anyway.  He was fortunate that these were otters and not a bear, but his encounter, while amusing on the surface, lends a lesson that should not be taken lightly:  Treat wildlife with respect and caution.