Before we start, go forthwith to Glibertarians and read the latest in my Allamakee County Chronicles series.

Now, moving on:  Last night I stumbled on this article over at Guns.com – The Best Handguns for Hunting.  Now, I carry a sidearm routinely when out and about my business in forest and field; a sidearm, to my thinking, should be something that can be carried in a belt holster all day with minimum inconvenience.  If you need more punch, pack along a rifle.  A handgun should be just that, a handgun, not a pocket rifle.

Guns.com has some other ideas.  Well, I have some comments on that.  Here are the five, with my commentary:

First:  The Nosler M48 Independence.   Sorry, but this isn’t a handgun.  You can’t pack this around in a holster.  This is a cut-down rifle.  I honestly can’t see the point of this kind of thing; it seems like it would be as much trouble t pack around as a rifle, and with that being the case, why not just pack a rifle? 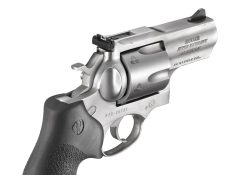 Second:  The Ruger Super Redhawk.  Now this is at least a handgun, well-suited for holster carry, at least in the trim shown.  Ruger does produce these in some rather sillier versions, with elongated barrels, muzzle brakes, bipods and so forth.  But in the short-barreled trim shown, it is at least portable, although in some of the calibers offered it might be a big handful. 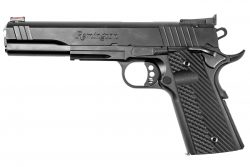 Third:  The Remington 1911 R1 Hunter.  Now this is more my idea of a sidearm, and the R1 Hunter is available in the walloping 10mm round, which doesn’t seem too popular these days but which packs almost a .44 Magnum-level punch.  And the 1911 pattern – well, damn few weapons have a better history for durability and reliability.

Fourth:  The Magnum Research BFR.  Now this is a perfectly ridiculous object.  Chambered in rounds including the .45-70, .30-30 and .500 S&W, this thing weighs as much as a lightweight rifle and has to be an order or two of magnitude more difficult to shoot.  If I need that much power, I’ll grab my Marlin Guide Gun, also in .45-70, but much more manageable – and only a little bit less portable. 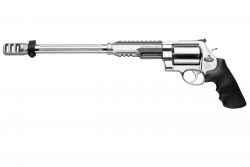 Fifth:  The Smith & Wesson 460.  Most of what I said about the BFR applies here as well, but the Smith lacks the versatility of chambering in big-punch rifle cartridges, making it even less versatile and no more portable.

Of the five, only two of them are really handguns, and one of those only marginally.

Long-term readers of these pages know my preferences in sidearms.  My favorite (left, middle) is my big Smith & Wesson 25-5, mid-Seventies vintage, .45 Colt.  This great piece (along with the .45 Colt Vaquero, also pictured) can be easily packed in a belt holster all day, and packs enough punch for most jobs you’d ask of a sidearm.  My favored load is a 255-grain hard cast Keith-type slug over 8 grains of Unique – do not try that load in an old Single Action Army, Colt New Service or anything but a modern revolver – and that will blow through a railroad tie or, from personal experience, lengthwise a big Iowa farm-country whitetail.

That’s enough handgun for just about anything.