On June 13, the anti-gun ordinance passed by the Chicago suburb would have gone into effect. It was essentially a gun ban, and there were no exceptions. It’s either you turn them over, move, or risk facing a $250-$1,000/ day noncompliance fee. Yeah, the AR-15 and other rifles the anti-gun Left finds scary were banned, but it also included scores of handguns. Magazines holding 15 rounds are not uncommon. Luckily, a circuit court judge blocked this law 24 hours from going into effect. And yes, legal challenges were filed against this grossly unconstitutional law (via Vice News):

A judge blocked a ban on assault weapons and high capacity magazines in the small town of Deerfield, Illinois, less than 24 hours before it was meant to go into effect.

The decision, handed down Tuesday evening in the 19th Judicial Circuit Court in Lake County, Illinois, is a small victory for gun rights groups, who sued the Chicago suburb in April after it became the first municipality to ban assault weapons following the Parkland high school shooting. The Deerfield ordinance was passed unanimously by all six board members on April 2.

Gun groups, including the National Rifle Association of Illinois, requested a temporary restraining order against the ban while the lawsuit proceeded. 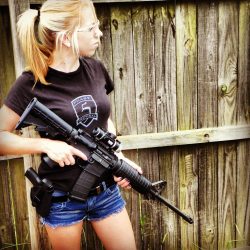 Here in Colorado the People’s Republic of Boulder passed a similar ban, seemingly defying our state’s pre-emption law.  Oregon has a similar ‘turn ’em in’ law proposed as a ballot initiative.  Thus the trend of blaming the sword for the hand that wields it continues.

At least one judge saw reason.  Here in Colorado, there’s already a lawsuit against the Boulder ban; we’ll see how that goes.

For decades the Left used the courts to jam through agenda items they couldn’t get through various legislatures.  It’s high time the Right tried fighting fire with fire.