Before we start,be sure to check out something different I wrote for Glibertarians!

Last weekend was a considerable adventure, as Mrs. Animal and yr. obdt. flew the Friendly Skies to Anchorage on Friday, then Saturday morning drove north and took actual possession of our new home in Willow.

Adjusting back to country living was faster than I expected, given the amount of time that has passed since my Allamakee County youth.  Example:  A good portion of the heating of this house is via a woodburning stove, which requires bringing in wood at least once a day;.  Fortunately the previous owners left us a good supply.  There are other chores I haven’t gotten to yet, on this our fourth day of residence, but they’ll follow.

The house is pretty empty at the moment, but we’ll be filling it up.

When we first arrived Saturday morning, about eleven AM, it was sixteen below zero.  There is about two feet of snow on the ground.  Up north around Trapper Creek and Talkeetna, we have it on good authority that there is six feet of the white stuff in places.  Welcome to Alaska winters! 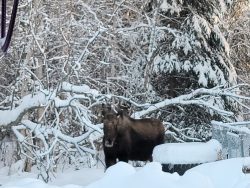 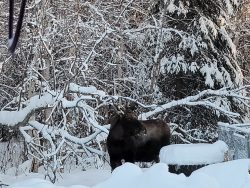 On Sunday evening, we had our first guest.

We first noticed her, a yearling cow moose, out by the now-empty dog run.  She’s on the skinny side, but didn’t seem uncomfortable as she moved slowly along, browsing on twigs and buds.  Last night as I was bringing in some stove wood I noticed her bedded down about twenty yards from the woodpile, and she raised her head to watch as I took in an armload of wood, but didn’t react.  She is a bit thin; Mrs. Animal and I were hoping she makes it through the winter, as a lot of young animals don’t.

Also yesterday, we went over to Palmer and visited the DMV for driver’s licenses.  We’re now, officially, Alaska residents.

A life properly lived should ever have one embarking on a new adventure.  Mrs. Animal and I have lived up to that, I think, in general; but this one is our biggest yet, greater even than Desert Storm in many ways.  Stay tuned!