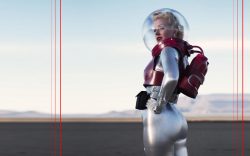 Before we jet off to Proxima Centauri, check out the latest in my Legionnaire series over at Glibertarians!

Now then:  Here’s another bit on a possible way to travel faster than light.  Excerpt:

For decades, we’ve dreamed of visiting other star systems. There’s just one problem – they’re so far away, with conventional spaceflight it would take tens of thousands of years to reach even the closest one.

Physicists are not the kind of people who give up easily, though. Give them an impossible dream, and they’ll give you an incredible, hypothetical way of making it a reality. Maybe.

In a 2021 study by physicist Erik Lentz from Göttingen University in Germany, we may have a viable solution to the dilemma, and it’s one that could turn out to be more feasible than other would-be warp drives.

This is an area that attracts plenty of bright ideas, each offering a different approach to solving the puzzle of faster-than-light travel: achieving a means of sending something across space at superluminal speeds.

“The energy required for this drive traveling at light speed encompassing a spacecraft of 100 meters in radius is on the order of hundreds of times of the mass of the planet Jupiter,” Lentz said in March last year.

“The energy savings would need to be drastic, of approximately 30 orders of magnitude to be in range of modern nuclear fission reactors.”

That puts a distinct damper on the whole discussion, doesn’t it?

But here’s the thing:  Every bit of speculation, every bit of experimentation, may bring us closer to what a lot of very smart people think is impossible – now.   The Old Man used to take a lot of pleasure leafing through old book stores, and in one he found a physics textbook from the early nineteenth century that spent a couple of pages explaining how impossible it would be to travel faster than sound.  So what we know today may seem stupidly ignorant a hundred years from now.

If there is any way to go super-luminal, I think (unless we manage to destroy ourselves first) we’ll find it.  It may be two hundred years from now – but we’ll find it.  After that?  What an amazing universe it will be.