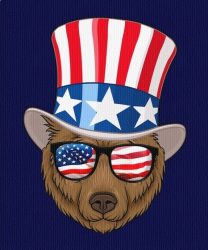 Before we start, go check out the latest installment of Season of Ice over at Glibertarians!  And if you’re not checking out the morning and afternoon links (and other great content) on that site, you should be!

Now then:  This is it.  The Big Day.  I won’t say much today, other than expressing some hope that the Red Tsunami will overcome the margin of fraud and that we’ll see some slight semblance of sanity return to the Imperial City.  The Left will predictably be screaming about fascists taking over, but here, from this piece over at Issues & Insights, is a good takedown as to why the Left is full of shit on this (as well as many other things.)

In contrast to the left’s campaign of disinformation, we present some facts:

I can’t add anything to that.  Mrs. Animal and I will be off to town later today, to do our civic duty and with a bit of luck, shed Alaska of the grifter Murkowski and the liberal Peltola.  Go, then, True Believers, and do likewise.  Vote!  Vote as though your liberty depends on it.  Because it does.