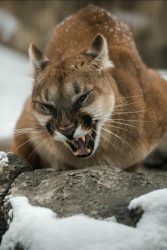 Mountain lions are causing some problems in the Colorado ski town of Edwards.  Excerpt:

Colorado wildlife officials issued a warning for the residents of Edwards this week after discovering a pride of 8 to 10 lions has been “roaming” neighborhoods in the area.

In recent days, residents have stumbled upon several animal carcasses and at least two attacks on dogs have been reported. The recent increase in mountain lion sightings prompted officials with Colorado Parks and Wildlife (CPW) to alert the Edwards-area to be on high alert.

“This is a troubling situation and we are very concerned for the safety and welfare of the people in this area,” CPW Northwest Regional Manager JT Romatzke said in an online statement Thursday. “We ask everyone to take this warning seriously.”

The CPW encouraged locals who spot a big cat in a residential area to alert them immediately and to keep a safe distance.

“We urge residents to be extremely cautious because lions are large, powerful predators and can be very dangerous if they’ve lost their natural fear of people,” CPW District Wildlife Manager Matt Yamashita added in a statement. “We are monitoring the situation very closely.”

Based on information they’ve recieved so far, officials believe there are two female lions that are each traveling with a litter of 3 to 4 juvenile lions — though the young lions are “nearly full grown, as large or possibly larger than their mother,” the CPW said.

First of all, this isn’t a “pride.”  Mountain lions are solitary creatures, excepting when a mother lion still has kittens with her.  This is two female cats with almost-grown kittens who happen to have overlapping ranges, which isn’t unusual.  These are also the least likely lions to cause trouble with humans, being smaller and less aggressive than the big toms, who have larger ranges and tend to stay away from humans.

But it’s still concerning.  Small children and most pets are well within the prey size range of a 100-pound female lion, and like most apex predators, lions see other animals as either a threat or potential prey.  In most of Colorado, lions aren’t threatened by humans.

In all my years of woods-bumming in Colorado, I’ve encountered black bears several times but have only laid eyes on two lions, both at a distance, although I’ve tracked a couple for a ways before being “made” by the lion.  The answer for the boonies is simple; carry a sidearm.  Shooting an overly aggressive lion or bear isn’t often necessary.  Especially in the case of a lion, the noise of a major-caliber pistol fired into the ground will most often see them off.

The best answer, though, is for the Colorado Division of Wildlife to loosen restrictions on the hunting of lions.  As noted above, apex predators see other animals as either a threat or potential prey.  Historically, mountain lions aren’t a threat to humans when they see humans as a potential threat.  Hunting the lions will have that effect.