Thanks as always to Pirate’s Cove for the Rule Five links, and to our blogger pal Doug Hagin over at the Daley Gator for Rule Five linkage and the post linkback!

This week, Home Depot (HD), Starbucks (SBUX) and Walt Disney (DIS) announced that they were handing out bonuses or raises — or both — as a direct result of the GOP’s tax cut.

Home Depot is giving hundreds of thousands of hourly employees what it calls “tax reform bonuses” of up to $1,000. Starbucks is lavishing $250 million in pay raises and stock grants on 150,000 workers, also crediting the tax cuts. At Disney, 125,000 workers are getting a $1,000 bonus, and the company is investing another $50 million in employee education programs.

These companies join more than 240 others — many of them household names like Apple (AAPL), Wal-Mart (WMT), AT&T (T), Auto Nation (AN), Boeing (BA), Comcast (CMCSA), Southwest Airlines (LUV) and Verizon (VZ) — that have already done so, putting more money in the pockets of at least 3 million workers.

This string of tax-cut-related good news is just beginning. In February, millions of workers will suddenly see their paychecks get bigger, as the law’s new, lower withholding schedules take effect. And this is to say nothing of the indirect effects of the tax cuts — more investment, faster economic growth, more jobs.

Even before all this, the GOP’s tax bill was growing increasingly popular, according to the New York Times, which found that support jumped from 37% to 46% in one month, with disapproval dropping from 58% to 49%.

Putting more money in people’s pockets is always a good thing, but ther 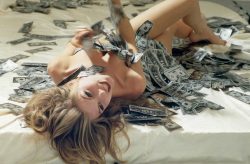 e’s a key difference in what you’re seeing happen since the tax reform bill was signed into law as opposed to what the Democrats wanted – and it’s important to note that not one Congressional Democrat voted for tax reform.

What you are seeing here is private companies voluntarily putting cash in the hands of their employees, case freed up by the passage of long-overdue corporate tax reform.

What the Democrats wanted was income transfer; using the confiscatory power of government to take money by force from those who have earned it to give it to those who have not.

Next year will tell the tale.  Dame Nancy Pelosi, speaking from her ocean-view mansion in San Francisco, is talking down the raises and bonuses, calling them “crumbs.”  They may be crumbs to her, but to middle America, a thousand dollars is still pretty substantial cash.  And if the economy explodes in 2018, and it well might, she may find her safe Democratic seat rather lonely.