In a bit of news from around the Arctic Circle, a film crew caught some footage of another starving polar bear.  Excerpt:

This year, biologist Paul Nicklen published a video online of an emaciated polar bear on Baffin Island rummaging through trash cans, looking for food. The polar bear was likely at death’s door when Nicklen captured the footage in late summer.
Nicklen, who founded the environmental group Sea Legacy, said he wanted to highlight the future polar bears face because of global warming. It worked, and the video has gone viral, sparking media coverage about a polar bear that’s a victim of a warming world.

“We stood there crying—filming with tears rolling down our cheeks,” Nicklen said, National Geographic reported.

But that’s nature for you.

There are a number of questions that I’d like to have answered that might shed a little more light on the whole thing: 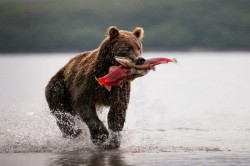 In other words, there are just too many possible explanations to just go off and go “RRHHHEEEEE!  Global climate change!  We must cripple our economy now!”  Large predators almost never die peaceful deaths.  They are killed in fights with other predators, they are injured trying to take down a prey animal, they die of disease or by accident, or they just plain starve.  It’s a damned tough world out there, and in the Arctic, it’s several quantum levels tougher.

Blaming this on climate change is some Olympic-level jumping to a conclusion.