Thanks as usual to The Other McCain and Pirate’s Cove for the Rule Five links!

Tucker Carlson’s The Daily Caller has an Outdoors section where they regularly review guns and gear, which is a nice feature; recently they reviewed the S&W X-frame .500 S&W.

A few short years ago one of my best friends and I were enjoying some incredible fishing on the Naknek River in Alaska. Those big king salmon could burn off line and give anglers some heart-pounding action. Steve, my fishing and deer hunting buddy and I were in the middle of some of the best fishing you could possibly find. There were only two annoying factors bothering us—black flies and brown bears.

We could deter the black flies with our cigars most of the time. The bears on the other hand were a different matter. Frequently bears would roam around camp so you had to constantly be on the lookout when cleaning fish or attending to other chores. We were continually looking over our shoulder when wading along a tributary dumping into the river. Tracks were everywhere and we weren’t the only ones fishing the area. We are headed back to Alaska this year, fishing the same waters as before, only this time I will be carrying a peace-of-mind insurance policy—the S&W 500.

Here’s the part that caught my attention:

The revolver tips the scales a shade over 56 ounces when empty and the weight comes in handy when shooting high-octane loads.

That’s three and a half pounds, True Believers, for a five-shot revolver.  That’s a full pound heavier than my N-frame 25-5, which carries six rounds of .45 Colt.  My favored load for my Smith, as noted the other day, will blast a fist-sized chunk of wood chips out of the far side of  railroad tie – that’s plenty of power for most handgun work.

I don’t get this whole mega-handgun craze.  A sidearm should be just that, a sidearm, something that can be conveniently and unobtrusively packed around all day through the normal range of outdoor activities.  Monster handguns don’t really fit that bill, at least for someone of my not-inconsiderable stature.  Some years back I had a .44 Magnum Desert Eagle and played around with it for a while, but I didn’t much care for it; too much flash and bang for the added power over the .45 Colt, and it was far too heavy to be easily packed around.  I haven’t fired one of the mega-Smiths, but I suspect the same would prove true. 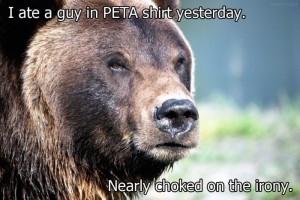 If you are in big bear country and need the kind of power one of the major-league Alaska bruins merits, carry a rifle or a pump shotgun stoked with hard-cast slugs.  You’ll be a lot better protected, and if you’re going to carry a firearm that will be inconvenient and in your way while fishing, you may as well go all the way.