Off to the airport in a few to return to the loony environs of Silicon Valley for another stint at work, after a pleasant weekend in our own Colorado.  But we always have time to extend our thanks to Pirate’s Cove and The Other McCain for the Rule Five links!

President Trump has submitted a budget, and it looks to be putting a whole bunch of Imperial bureaucrats on notice:  Put up or shut up, and by shut up, he means “you’re fired!”  Excerpt:

President Trump’s administration, unlike its predecessor, understands that when a federal program is failing, it might be time to end it rather than shovel more money into it. That much is clear not just in the programs eliminated in Trump’s proposed budget, but in justifications given for many of the cuts.

The $202 million International Food for Education program? Eliminated, because it “lacks evidence that it is being effectively implemented to reduce food insecurity.” The $2.4 billion Supporting Effective Instruction State Grants program? Gone, because it is “poorly targeted and spread thinly across thousands of districts with scant evidence of impact.” The $3 billion Community Development Block Grant program? Erased, because it “has not demonstrated results.”

In addition to saving taxpayer money, this puts bureaucrats on notice that they must prove effective and worth the money or they’ll be on the chopping block.

Rumored to be on the chopping block, as in eliminated completely, are such Imperial nonsensical money pits as the National Endowment for the Arts and the National Endowment for Humanities.  I only just quoted this a week ago, but it bears repeating:  As Robert Heinlein famously said, “a government-subsidized artist is an incompetent whore,” and now (hopefully) some incompetent whores will be cut off the Imperial teat.

Fact is, True Believers, that the Imperial government not only shouldn’t be paying for this sort of thing – the Constitution, read 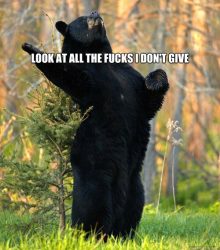 with a grain of sense, actually prohibits it – but they can’t pay for this sort of thing anymore.  $20 trillion in debt and unfunded obligations kind of precludes it.

Democrats in Congress (and a few Republicans as well) will call President Trump’s proposed budget “heartless,” “cruel” and some other pejoratives.  We call it “a good start.”  And I have a pretty good idea (see image to left) what the President’s response will be to the cries of outrage.