2017 is here!  To open this auspicious new year, first we’ll extend our thanks once again to Pirate’s Cove and The Other McCain for the Rule Five links.

File this under “Doubling Down on Stupid”:  California is trying even harder to drive small businesses out of the state.  Excerpt:

With California in full revolt against the incoming Trump Administration swearing to go to war with the other 49 states, the elected Leftists who run the state struck again against small businesses in the state. The government enacted 900 (yes, you read that correctly) new laws for 2017. One they snuck under everyone’s nose is a revision of the very expensive worker’s comp system.

As you probably know worker’s compensation insurance is paid by employers to cover medical costs for an employee getting injured on the job. It is a sure bet, as you suspected, that California has the costliest worker’s comp rates at $3.24 per $100 of payroll. The next most costly state is New Jersey which is 10% lower ($2.92 per $100). To give you an idea what the insurance rate is in sane states the rate in North Dakota is about 25% of California ($.89 per $100) or Indiana at $1.06 of $100.

This cost has contributed to driving businesses out of state and having existing employers avoid paying the rates like the Plague. Because making claims in California are so easy and adjudication of claims is so pro-employee, rates often rise for employers after they make their initial payments. As an employer you want to avoid this cost especially for owners of your corporation or partnership (LLC). Owners would almost never use anything other than their personal medical policy to cover any medical costs so they could avoid this secondary medical system and the related costs. No more in California.

Here you see the consequences of single-party rule of a major state.

Economics doesn’t really have a lot of hard and fast laws, but it does have a few; one of them is supply and demand.  The vast majority of new jobs created in our economy are created by small businesses. 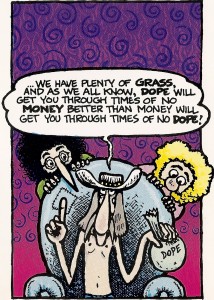 Why?  It’s simple; they grow, sometimes dramatically, and growth usually requires more employees.  Big, mature companies like Ford Motors or even Microsoft hire mostly to address attrition, as people quit or retire.  But a successful startup may employ ten people this year, fifty people next year, and two hundred the year after that.

That’s the engine of growth in our economy.  Californey intends, apparently, to crush that growth by raising the price of a key commodity – labor – and thereby reduce the supply of said labor that is economically attainable by small business.

Maybe California’s secession from the Union wouldn’t be such a bad thing.