A recent find makes one wonder if Vikings in a Newfoundland settlement may have been getting high.  Excerpt:

The discovery of cannabis pollen near a Viking settlement in Newfoundland raises the question of whether the Vikings were smoking or eating pot while exploring North America.

The researchers also found evidence the Vikings occupied this outpost for more than a century, way longer than previously believed.

Located in northern Newfoundland, the site of L’Anse aux Meadows was founded by Vikings around A.D. 1000. Until now, archaeologists believed that the site was occupied for only a brief period. The new research, published today (July 15) in the journal Proceedings of the National Academy of Sciences, suggests that the Vikings lived there possibly into the 12th or even the 13th century.

In August 2018, an archaeological team excavated a peat bog located nearly 100 feet (30 meters) east of the Viking settlement at L’Anse aux Meadows. They found a layer of “ecofacts” — environmental remains that may have been brought to the site by humans — that were radiocarbon dated to the 12th or 13th century.

These ecofacts include remains of two beetles not native to Newfoundland — Simplocaria metallica, from Greenland, and Acidota quadrata, from the Arctic. The layer also held pollen from Juglans (walnuts) and from Humulus (cannabis), two species that don’t naturally grow at L’Anse aux Meadows; rather, the Vikings could have picked up all of these plant and animal species when they sailed south.

Now, color me skeptical.  While this find is amazing – actual, hard evidence of repeated Viking occupation in the New World, predating Columbus – the headline is sensationalist nonsense.  The presence of hemp pollen isn’t any sort of evidence at all that these Norsemen were smoking or eating marijuana.  All plants of the hemp family have a variety of uses, not least of which are rope and clothing, two things that a pioneer settlement needs plenty of. 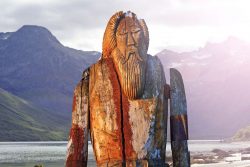 It’s too bad; LiveScience does this fascinating story a disservice with an unsupported, sensationalist headline.

Still, the story itself, that’s interesting stuff.  Two hundred years before Columbus, men and women in open longboats, with no sextants, no compasses, no clocks, crossed the Atlantic and established a settlement in what is now Canada.  And, they did it more than once.  That’s courage you have to admire.