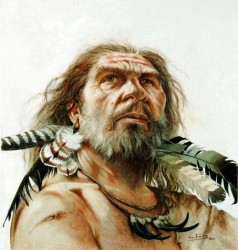 Turns out that if you declared a thumb war with a Neandertal, you’d have an edge.  Who knew?  Excerpt:

“If you were to shake a Neanderthal hand you would notice this difference,” Ameline Bardo, a postdoctoral research associate from the School of Anthropology and Conservation at the University of Kent, explained in an email. “There would be confusion over where to place the thumb, and for a thumb fight I think you would win in terms of speed and movement.”

More practically, the thumbs of Neanderthals were better suited for squeeze grips—like the way we hold a hammer when we’re bringing it down. Specifically, we use these power grips, as they’re also called, to hold tools or other objects between our fingers and the palm, while the thumb is used to direct force. Neanderthals didn’t have hammers with handles, but these power grips were probably useful when hafting stone tools, or when gripping stones to use as hammers.

At the same time, this possibly means that precision grips—in which objects are held between the tip of the finger and thumb—may have been more challenging for Neanderthals. Challenging, but not impossible. As contradictory research from 2018 shows, Neanderthals did apply precision grips when doing manual work. What the new research suggests, however, is that precision gripping wasn’t very comfortable for Neanderthals, and that they may have been more inclined towards power gripping. Unfortunately, we can’t travel back in time and see for ourselves, so this will likely remain a healthy debate amongst archaeologists and anthropologists for the foreseeable future.

That said, and as Bardo explained in her email, their “hand anatomy and the archaeological record makes abundantly clear that Neanderthals were very intelligent, sophisticated tool users and used many of the same tools that contemporary modern humans did.”

Paleo-anthropology has long been an interest of mine, one I shared with the Old Man.  In fact, I have a museum-grade replica of a Neandertal skull that was originally a Father’s Day gift to the Old Man, which I got back when he passed away.  It’s an interesting thing to examine.  The sloping forehead and receding chin can give the impression that the Neandertal were dull, brutish people, but they weren’t.  They were certainly different, but not necessarily any more primitive than our ancestors at the time, and they survived in Ice Age Europe for a long damn time.  Thumb dexterity aside, they were powerful people, short, stocky and very muscular. As the article concludes:

What we can say, however, is that Neanderthals were successful for an extended period of time, appearing some 400,000 years ago, and becoming extinct around 45,000 years ago (and for reasons we still don’t really understand). Neanderthals were also crafty, as they created their own jewelry, made cave paintings, decorated themselves with feathers, and used the lissoir—a specialized bone—for working through tough animal hides.

Were I to meet a Neandertal today, sure as hell I’d shake his hand – but very carefully.  I wouldn’t want to arm-wrestle him, but I might offer a thumb war challenge.