Here, True Believers, we have some Gwyneth Paltrow-level horseshit.  Excerpt:

Colorpuncture applies various colors of light to acupoints with a small flashlight-like instrument with a colored quartz rod. The tip of the instrument touches the skin or is held a short distance above it. Seven basic colors are used: the warm colors (red, orange, and yellow) increase energy; the cool colors (green, turquoise, blue, and violet) decrease energy. Using warm and cool colors together will balance yin and yang energy flows. Treatments last 10 to 90 minutes.

Colorpuncture is a form of light therapy based on the hypothesis that photons are emitted by cells, allowing them to communicate. “Illness occurs when the cells can no longer speak the same language.” A German naturopath, Dr. Peter Mandel, supposedly developed colorpuncture over thirty-five years of intensive empirical research. It supposedly addresses the nonphysical origins of illness by “inviting our basic life energy to rearrange itself into a new state of balance.”

Please note that the linked article is debunking, rather than advocating, for the enormous steaming pile of woo that is “colorpuncture.” 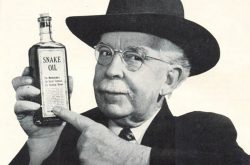 While the purveyors of this nitwittery are of a kind with those who sell Ms. Paltrow’s corral litter, I’ll give the colorpuncture frauds credit for one thing; at least they are unlikely to do anyone an actual injury, unless some moron gets the genius idea to use lasers to get a stronger effect.  Can’t say that for Ms. Paltrow and her “shove a jade egg up your cooze to remove toxins” line of crap.

As I’ve said so often in these virtual pages, there is a point where fools and their money deserve to be parted.

But just the idea that there are people out there stupid enough to buy into this crap – that’s just downright unsettling.